Grant Applications for the KOEF 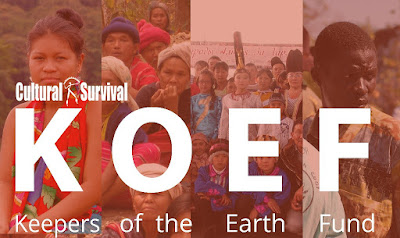 CALL FOR APPLICATIONS
Deadline: October 27, 2017
Keepers of the Earth Fund
Cultural Survival is pleased to announce the Keepers of the Earth Fund (KOEF) Call for Applications. The KOEF is a small grants fund that supports Indigenous values-based community development.  These grants have supported Indigenous-led projects on the leading edge of solutions to the most pressing issues for Indigenous Peoples everywhere.

Through the general KOEF, Cultural Survival intends to provide grants ranging between $500 and $5,000 to Indigenous-led and -controlled organizations and groups around the world.

Grants can support projects focused on a vast array of development activities. Applications will be viewed with an eye toward innovation, Indigenous values woven into the design of the project, and projects addressing real-time development needs. The connection between Indigenous values and the proposed project should be clearly articulated.

The primary purpose of the Keepers of the Earth Fund is to empower grassroots Indigenous communities in establishing their rights and retaining their traditional values.

We seek to fund projects that work in collaboration with others for the larger community as opposed to working alone. We encourage partnerships and networking, capacity building for results, and strategic approaches to Indigenous development.

Grant applications will be accepted through October 27, 2017. For guidelines and grant applications for the KOEF, please visit https://www.cs.org/programs/advocacy/koef or contact koef@cs.org.

In this Call for Applications, we will NOT consider applications to support Self-Governance and Free, Prior, and Informed Consent (FPIC) projects as we have a separate special initiative fund for these topics.
Since 2005, the KOEF has awarded $2.3 million to 357 Indigenous nonprofits in 64 countries.
Posted by EMLI Bwaise Facility at 01:04 No comments:

Climate change has been documented to be induced by human activities such as agriculture, industrialization and construction with impacts directly deterring economic growth. In Uganda climate change impacts are evident with increasing food prices due to supply side shocks to agriculture caused by drought, declining water levels and increasing disasters (floods, landslides and drought) which in turn have exacerbated poverty levels in Uganda. Furthermore, climate change has continued to distort livelihood sources and made access to the basic needs i.e. water, food and shelter extremely difficult.

Looking at the societal class most affected, it is the vulnerable people (poor, disempowered and marginalized) severely affected by the impacts of climate change due to limited alternatives to adapt to climate change and already existing economic, physical and social challenges like disability, poverty, education a few to mention. Such exerted external influence to already vulnerable class of society is collectively qualified to result in injustices to such vulnerable groups.
According to the Mary Robinson Foundation, climate justice refers to sharing the burdens and benefits of climate change and its resolution equitably and fairly. Elsewhere, civil society organizations have contextualized Climate justice as a mechanism that can help to strike a balance between shared climate change burdens and benefits at all levels of the country e.g. when governments/public sectors fail to promote inclusive and equitable responsive actions to combat climate change impacts, climate injustice is inevitable.

Different scholars have highlighted the relationship between Climate justice, human rights and development with the Mary Robinson Foundation qualifying the achievement of human centred approaches. Climate Injustices can be manifested in forms of; information gaps on climate change response actions, decision making gap and limited transparency and accountability in implementing climate actions.

The Foundation has moved a step forward to guide on how to ensure climate justice by developing 7 fundamentals i.e. 1) Respect and protection of Human Rights, 2) Support the right to development, 3) Share burdens and benefits equitably, 4) Ensure that decisions on climate change are participatory, transparent and accountable, 5) Highlight gender equality and equity,  6) Harness the transformative power of education for climate stewardship and 7)Use effective partnership to ensure climate justice.

Despite the close relationship of climate Justice between human rights and development, to many, Climate justice is considered as a new term. Noting that different stakeholders understand and address things differently, building national consensus on what entail climate justice is one such way to enable stakeholders’ dialogue and raise awareness.

In line with the Rio Principle 10 that sets out the 3 fundamental rights: access to information, access to public participation and access to justice, Climate Justice begins with closing the information gap on climate change, its impacts and existing opportunities. For example youth have a role to play in advancing climate justice though such a role is greatly dependent on the levels of awareness and understanding of climate change, youth involvement in decision making and actual implementation of climate actions.

If Uganda is to advance climate justice this should be through; communicating a common clear message, improving transparency and accountability to citizens, promoting partnerships with private and public intuitions and raising awareness on the burdens and benefits from climate change. Therefore, while contextualizing climate justice in Uganda, it is necessary to undertake an audit on how practices for climate action respond to the 7 principles established by the Mary Robison Foundation.


Fellow at EMLI
Posted by EMLI Bwaise Facility at 23:24 No comments: 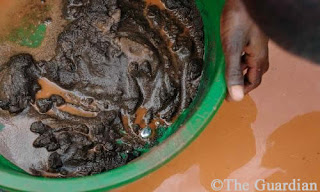 Environment means the surrounding of man i.e. wetlands, forests, lakes and rivers. Environment has a great contribution on the livelihood of man. However, in Uganda the environment is over strained due to human activities, for example the natural forests, wetlands and rivers hence has been encroached on by man in the disguise of development and looking for settlement, land for agriculture and construction of roads among others.

Attempts have been done to reverse the situation by both public and Government of Uganda a case in point is the concluded cleaning exercise done in Wakiso district, Kazo parish in different schools (Kazo mixed primary school, Fairway high school and Kazo Islamic primary school) under the theme Promoting Hygiene, Sanitation and Environmental Protection as the following stood out as key good practices in environmental management.

Sanitation and environmental protection is a key factor today in environmental management. This can be done through general cleaning exercises in the community, for example in schools that can involve waste and garbage collection, , toilets and urinals, tree planting to protect from extinct environment and environmental education.

Coordination/joint effort among stakeholders i.e. community members, schools, organizations and others is very key in promoting environmental protection as it helps to build social responsibility amongst community members in realizing a common goal.

Sanitation and environmental protection is a challenge mostly in highly populated schools such as in UPE schools that have limited social responsibility. Authorities such as schools, locals and others should become more visible here to save the environment and promote sanitation. For example during a cleanup exercise in schools around Kazo Parish, as the Director of Fairway High school commended the youth of Kazo Youth Players Association (KYPA) for the work and effort they do in promoting hygiene, sanitation and environmental governance in the area.
Waste management and environmental education are critical in environmental governance and ensuring proper sanitation. Through sensitization, establishment of environmental clubs, tree planting, promoting good sanitation and proper waste management, we can ensure living in a clean and disease free environment from children. Technical guidance on environment protection and also providing IEC materials to schools during such activities will also lead to continuous spread of the information.

In a nutshell promoting good environmental governance and preserving the Ecosystem in schools, neibouring communities and the country at large will make a “CLEAN AND GREEN PERFECT SCENE.”

Posted by EMLI Bwaise Facility at 00:07 No comments: