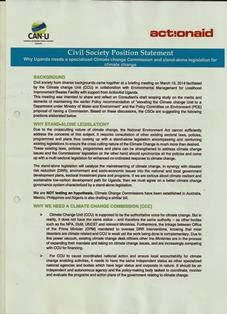 Based on the discussions on legal implications of a Department and a Commission, Participants proposed a Commission as compared to a Department. This was due to the fact that the Department is small and does not have a mandate over other ministries to develop the performance framework as well as coordinating specialized regulatory agencies such as National Environment Management Authority (NEMA).
Participants have proposed the following to justify the kind of Climate Change Commission (CCC) needed in Uganda. The CCC should:
Posted by EMLI Bwaise Facility at 07:48